The site of Paliafito Eco-Arts Park was once the second home of the Hanover Street Congregational Church. The church dated back to the 1850’s in Walkers Point. Dedicated on April 24, 1892, it was constructed in Romanesque style at a cost of $20,000. The church covered 97 feet on South Third Street and 89 feet on Walker Street. The main entrance was located at the corner of both streets and had entrances on each street. The basement was built of stone with the remainder constructed of cream city brick. There was also stone trim with red tile ornamentation.

The Congregational church closed in 1921 and it became the Gospel Lighthouse Church. The following year, the site was purchased by Goodwill Industries for $18,000. It was used as The Goodwill Community Center until 1942. After being used as a Pentecostal church and a publishing company, it became the Sky View Nursing Home from 1952 – 1969. The Sky View Nursing Home was run by the Paliafito family for which the park was named. The building was razed in 1970. The site was abandonded until it was secured for use as a park by Historic Walkers Point Inc. (now Historic Milwaukee Inc.). It was dedicated in 1978.

In 2000, a public artwork titled “Stone Bracelet” by Zoran Moisilov of Minneapolis was installed and dedicated as Milwaukee’s first Neighborhood Millenium Art Initiative installation. The work is a large chiseled stone fitted with stainless steel loop near its top from which smaller rocks are suspended on four sides of the sculpture.

In 2014, Arts @ Large, an arts organization located in Walker’s Point, secured a 25 year lease with the City of Milwaukee and community partner, Solutions in the Land to redevelop and operate the park. Working with Reflo Sustainable Water Solutions, a not for profit organization focused on sustainable water use and green infrastructure, community members were invited to share in the design and build out of the park to include a 7,000 gallon underground rain catchment cistern, 1100 sq. ft. of community gardens and a performance stage for community events.

This park is one of the newest stops along the Milwaukee Eco Tour, a walking and biking tour of Sustainable Sites in Milwaukee! – Click to take the tour. 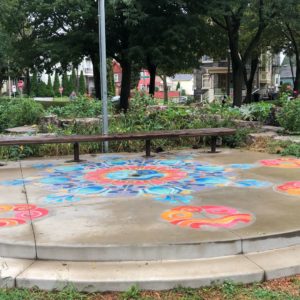