What you will see:
Amenity Rooms

The exterior of Immanuel Presbyterian Church is in nearly original condition.  It was constructed of cream gray Wauwatosa limestone and trimmed in red orange and gray sandstone creating a permanent polychromed effect. The main entrance of the Church is between two towers, with three arches’ portals fitted with intricate wrought iron gates made by prolific iron work artist Cyril Colnik.

The original interior was just as elaborate as the exterior.  The auditorium, which seated 1000, soared 90 feet to the roof beam.  On both side aisles, richly carved Gothic arches sheltered the best seats in the house, complete with armchairs and book tables.  One early visitor commented on the “surprising brilliancy” of the interior, the result of 700 gas jets (electric lights were added later), 95 stained glass windows and a variety of frescoes and carvings.  A disastrous fire in 1887 destroyed the interior.  The trustees decided to finance the restoration entirely with fire insurance proceeds.  As a result, the new interior was simple, even stark, in comparison with the original. Immanuel has four windows designed by Louis Comfort Tiffany, two on each side of the sanctuary.

The Presbyterian congregation’s first church was built in 1841.  The small Greek Revival church was located on Milwaukee and Mason which is now the site of Karl Ratszch’s restaurant.  In 1848, the congregation split into factions forming First and North Churches.  These two factions reunited in 1870 to form Immanuel and three years later built this church.  By the time the present building was dedicated in 1875, Immanuel had spent between $170,000 and $200,000 on the project.  It was easily the most expensive church built in Milwaukee up to that time.

Visitors will be welcome to tour the sanctuary and other common areas, or take a more in-depth tour of the entire building including the new addition and basement renovation. 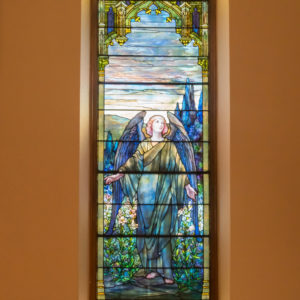